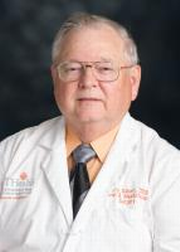 Dr. Harry Gilbert was born and raised in western Kansas. He attended Fort Hays State University until he was accepted as a three-year candidate at the University of Missouri at Kansas City School of Dentistry (UMKC). Upon graduation from UMKC in 1971, he was accepted as a general practice intern by the U.S. Public Health Service Hospital (USPHS) in New Orleans. After serving two years with the USPHS, he opened a private dental practice in Plainville, Kansas. After seven years of general dentistry practice, he was accepted as an oral and maxillofacial surgery resident at the Veterans Administration Medical Center in Detroit, Mich. On completion of his residency in 1980, Dr. Gilbert opened a specialty practice in oral and maxillofacial surgery in Great Bend, Kansas.

In June 2014, Dr. Gilbert retired from the VA hospital after a total of 37 years of federal service. He accepted a full–time position at UTHealth School of Dentistry as Director of Undergraduate Oral and Maxillofacial Surgery Training.

He currently holds the Nguyen-Thang Family Professorship in Oral and Maxillofacial Surgery.