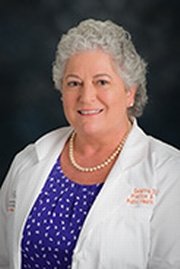 Dr. Delattre is Professor in the Department of General Practice and Dental Public Health, where she has served as faculty since 1994. After receiving her Doctor of Dental Surgery degree from the University of Texas School of Dentistry at Houston in 1986 she opened a private dental practice, treating patients until she joined the faculty of the School of Dentistry in 1994. Currently she is the Course Director of Foundational Skills for Clinic I, Foundational Skills for Clinic II, Forensic Dentistry Elective, and the Advanced Forensic Dentistry Elective, and she supervises students in the dental clinics.

In the field of forensics, she received board certification as Diplomate of the American Board of Forensic Odontology in 2005, shortly after achieving the status of Fellow of the American Academy of Forensic Sciences in 2004. In 2006 she became a charter member of the FBI’s National Dental Image Repository Review Panel, a part of the Criminal Justice Information System, where she continues to serve in the effort to facilitate the identification of missing, unidentified, and wanted persons. In 2008 she received the FBI Assistant Director’s Award for Exceptional Public Service, for exemplary performance in conjunction with the National Dental Image Repository, with the awards ceremony held at the West Virginia headquarters of the FBI’s Criminal Justice Information System.

In the field of academia, she is a member of the UTSD Dean’s Academy of Distinguished Teaching Scholars, and has achieved the status of Fellow of the Academy of General Dentistry. In 2012 she was awarded the Dean’s Teaching Excellence Award for Scholarship in Teaching. She received the Fellow of the Academic and Administrative Leadership Development Program from UTHealth in 2006, followed by completing the two-year Educational Scholars Fellowship Program in 2011, a joint curriculum between Baylor College of Medicine, UT School of Dentistry, and UT Medical School at Houston.

She has authored several book chapters, most recently "Science and Forensic Odontology" in the Manual of Forensic Odontology, Fifth Edition. She has also led continuing education courses, lectured at national meetings, and authored numerous publications in the field of forensic dentistry and dental education.