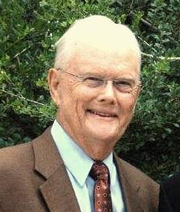 Dr. Bonham Magness serves as Clinical Professor in the Department of Orthodontics. He earned his DDS from the University of Texas School of Dentistry at Houston in 1956 and Orthodontic certificate from UTSD - Houston in 1960. He served in the United States Air Force from 1956 -1958 at Lackland AFB in San Antonio. Dr. Magness has taught graduate orthodontics at UTDB for the past 46 years. Dr. Bonham was given the 2007 Dale B. Wade Award of Excellence in Orthodontics, one of the highest awards given by the American Board of Orthodontics, at the 2007 annual meeting of the American Association Orthodontists in Seattle, WA. The award honors an exemplary senior clinician who demonstrates exceptional dedication to orthodontics through clinical excellence and/or devoted teaching in the image of Dr. Wade. Dr. Bonham Magness and his son Dr. Marc Magness currently practice at Magness Orthodontics in the Memorial City area. This Houston orthodontist and their team are celebrating their 55th year.