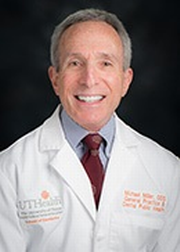 Dr. Miller graduated from Penn State University in 1970 with a bachelor's degree in science. He then earned a DDS in 1974 from the University of Maryland School of Dentistry in Baltimore, Maryland, where he was a member of the Gorgas Odontological Society. He completed a General Practice Residency at the Veterans Administration Hospital in Houston in 1975 and stayed at the VA Hospital as a staff dentist for an additional year. In 1976, he opened a private practice in west Houston.

Dr. Miller’s main area of interest has been esthetic dentistry, which led to his helping start the American Academy of Cosmetic Dentistry in 1984. As a founding member, he was the first chair of the Accreditation Committee and he wrote the initial version of the accreditation program. Dr. Miller remained the accreditation chair for the first five years of the AACD and helped establish it as the premier cosmetic dental organization in the world.

In 1986, Dr. Miller’s quest for unbiased product information for his own dental practice lead him to create Reality Publishing Company, which has grown into one of the leading non-commercial product evaluation sources in the world today. In 1992, he received the Excellence in Journalism Award from the AACD and in 1993, he received a Special Citation Award in Journalism by the International College of Dentists.

In 2005, Dr. Miller helped start and served on the board of directors of the National Children’s Oral Health Foundation, which is dedicated to fostering the development of local dental health and education facilities for children who do not currently receive any type of care. In addition, he has also served as the dentist for the Houston Boxing Association.

He shares his life with his wife Ingrid, who is an orthodontist, his daughter Jenny, and their two lovable Shar-Pei puppies.