UTHealth Houston School of Dentistry will be closed Thursday, Nov. 24, and Friday, Nov. 25, in observance of the Thanksgiving holiday.
The Urgent Care Clinic will reopen at 7:30 a.m. Monday, Nov. 28, by appointment only. 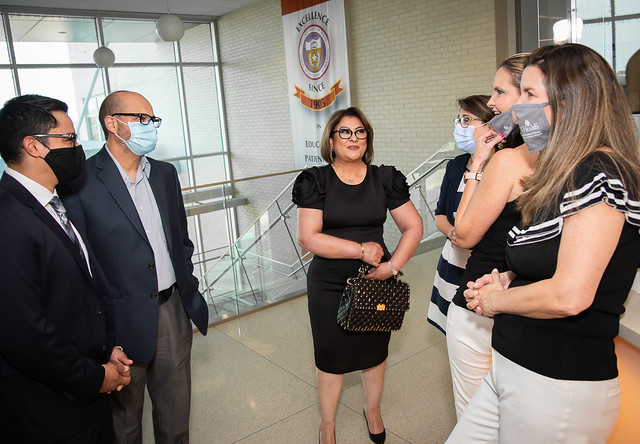 As Victoria Q. Cisneros, DDS, MS, balanced classes, labs, and clinics with family life, her fellow students would prove themselves much more than just classmates.

Dr. Cisneros started the Advanced Education in Prosthodontics Program at UTHealth School of Dentistry later than most; more than a decade after earning her DDS at University of De La Salle Bajío in Mexico, she had settled into life in Houston with her husband—third-generation Corpus Christi native Ricardo Cisneros—and young son, Ricky.

Her parents, Rafael Antonio Quiteño and Maria Teresa Marmol, had instilled in her the importance of education. When Jarvis Chan, DDS, PhD, encouraged her to apply to the School of Dentistry’s program—offering his support and guidance—she was receptive to the idea.

“At the time though, I didn’t have anyone to take care of Ricky. My husband worked nights at the airport,” Dr. Cisneros said, adding that even with his tough work schedule, Ricardo—her husband now of 34 years—loved and supported her tremendously while she pursued her training.

With permission from Catherine Flaitz, DDS, MS, then dean of the school, Dr. Cisneros brought Ricky to her 7 a.m. pathology class—which Dr. Flaitz taught—before dropping him off at school. Her fellow students stepped in to help Dr. Cisneros manage her competing responsibilities; she remembers Patricia Riano, DDS, MS, taking Ricky to and from school when needed, while Amanda Echeverria, DDS, MS, and Fabian Paluk, DDS, MS, would bring him to the library for homework.

“It was tough, but Ricky was such a great kid,” Dr. Cisneros said. “I am so thankful for my friends and classmates who went out of their way for us. He will actually be a dentist in a couple of years himself now.”

Even with her own demanding schedule, Dr. Cisneros also found a way to help others, hosting the international students in her class—often from Latin American countries—on weekends and holidays so they would not feel homesick.

Since graduating in 2003 and developing her own private practice, Cisneros Dental Group, Dr. Cisneros has decided to give back to the program in a big way: pledging a substantial gift to the Department of Restorative Dentistry and Prosthodontics, with an endowment to be established now and an estate commitment to bolster the future of the program. In recognition of her generosity, the graduate clinic will be named the “Victoria Q. Cisneros, DDS, MS, Advanced Prosthodontics Clinic.”

“On behalf of our students, residents, faculty, and staff, I thank Dr. Cisneros for her generous support of UTHealth School of Dentistry,” said Dean John A. Valenza, DDS, holder of the William N. Finnegan III Distinguished Teaching Professor in the Dental Sciences. “Her gift will advance innovative patient care, education, and research for the Advanced Prosthodontics Program and nurture the education of specialists like her for generations to come.”

This is Dr. Cisneros’s second major gift to the School of Dentistry; she established the Veteran’s Oral Health Endowment in 2017 to honor members of her husband’s family who served in the military: his father, Antonio, fought in World War II, and his three brothers served in Vietnam. That endowment also serves as a tribute to her mentor, Air Force veteran Robert L. Engelmeier, DMD, former director of the Advanced Education in Prosthodontics Program, who went the extra mile for residents and played a crucial role in her success.

“I come from a family of giving, so helping others was normal for me growing up,” she said. “I also want to set an example for Ricky so he can continue to give back to the community.”

Always grateful for those who helped her achieve her goals, Dr. Cisneros remembers them well: Mauricio Recinos, DDS, MS, who welcomed her into the program with open arms; Maria Gonzalez, DDS, MS, currently an associate professor in the Department of Restorative Dentistry and Prosthodontics at the School of Dentistry, who helped with lab work during preceptor training; and Santiago Caram, DDS, MS, and Xavier Saab, DDS, MS, who helped her with PowerPoint presentations.

“I was lucky to have good friends and classmates when I was there,” she said. “We always helped each other.”

Looking back, the notion that “good times become good memories, but tough times become good lessons” resonates for Dr. Cisneros. However challenging it was, though, she wouldn’t change a thing about her experience at UTHealth School of Dentistry, as it marked her path in dentistry.

“I received so much from the school, and I wouldn’t be in the position I am now if it weren’t for that opportunity,” she said.

For information on ways to support UTHealth School of Dentistry through scholarships or other gifts, visit uth.edu/giving or contact UTHealth Office of Development at 713-500-3200.