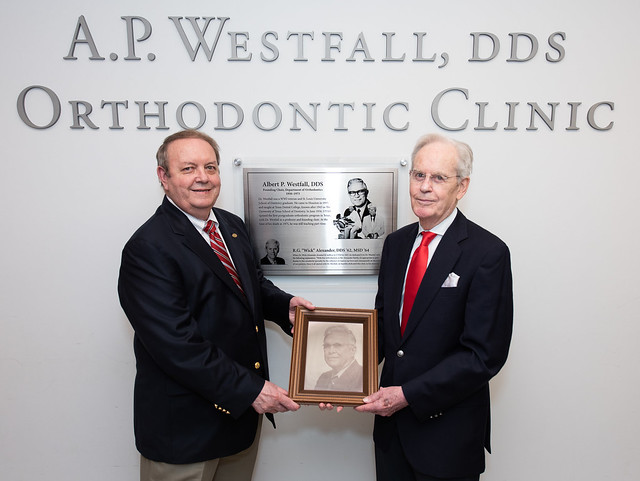 Two visionary leaders in orthodontics were honored in a special ceremony at The University of Texas Health Science Center at Houston (UTHealth) School of Dentistry, where their contributions changed lives and inspired others to greatness.

The recent event celebrated the unveiling of a plaque commemorating both A.P. Westfall, DDS, founding chair of the school’s Department of Orthodontics, and his former student, R.G. “Wick” Alexander, DDS ’62, MSD ’64, whose $1 million gift to the School of Dentistry in 2007 energized fund-raising for the school’s new building, inspiring others to make major gifts of their own.

At the time, the gift from Alexander and his wife Janna was the largest from an individual in the school’s 102-year history and qualified for significant recognition from The University of Texas. Instead, the Alexanders chose to dedicate their gift to Westfall’s memory, and that’s how the orthodontic clinic came to bear Westfall’s name.

Since 2012, the “A.P. Westfall, DDS Orthodontic Clinic” has been prominently marked in a third-floor hallway at the school, with only a small sign near the clinic door acknowledging the Alexanders. That changed with the unveiling of the new plaque, which features images of Westfall and Alexander, plus brief biographical information about each.

At the ceremony, Dean John Valenza, DDS, William N. Finnegan III Distinguished Professor in the Dental Sciences, explained the new plaque’s design. “As time went by, people would ask, ‘Who was Dr. Westfall? Who was Dr. Alexander?’” he said. “So we wanted something visual that told the story.”

Valenza noted that a wave of philanthropy followed the Alexanders’ gift, leading to five endowments for the department where none existed before and giving another alum, B.J. Westbrook, DDS ’54, the idea of giving a million dollars to the school.

Department of Orthodontics Chair and Professor Jeryl English, DDS, MS, who holds the Fred A. and Dianne F. Garrett Endowed Chair in Orthodontics, highlighted Wick Alexander’s other contributions to the school and profession.

Now retired, Alexander maintained a private practice in Arlington while serving as an adjunct professor at the School of Dentistry, teaching both residents and faculty; in fact, lecturing around the world. He developed “The Alexander Discipline,” a method of practicing orthodontics that is widely known today.

In 1964, Alexander’s graduate thesis, “The Effects on Tooth Position and Maxillary Vertical Growth During Scoliosis Treatment with the Milwaukee Brace,” won the prestigious Milo Hellman Award for Research — making him the first of only two UTSD alumni in the department’s 61-year history so honored.

“We had to convince Dr. Alexander that we should have this ceremony,” English said. “He thought that little card over there was enough, but we convinced him that this gift from him and Janna has been critical to the longevity of this school.”

Alexander spoke briefly before the unveiling. “We are so humbled by this day and appreciate the efforts by everyone,” he said. “There are too many to thank, but I must recognize my wife, Janna. She has been the wind beneath my wings.”

They married during his first year in dental school, when she was a physical therapist at the Texas Institute for Rehabilitation and Research (known today at TIRR Memorial Hermann). It was a connection that literally opened the door to his thesis research when Janna took Westfall and her husband on a tour of her workplace.

“If she hadn’t done that, a lot of things wouldn’t have happened,” Alexander said. “We walked into a room where there were 20 youngsters with scoliosis braces; I’d never seen one before. Dr. Westfall said, ‘Wick, this is your secret to success. This is your thesis.’”

Two years later, that thesis research led to Alexander receiving the Milo Hellman Award from the American Association of Orthodontists. The effect was game-changing for himself, his wife, and for every orthodontic student who graduated afterward, as it gave Alexander a desire to continue to teach and conduct research in development of his Alexander Philosophy of Orthodontic Treatment.

“Many of us could tell stories about the personal relationship we had with Dr. Westfall. He was stern, but you knew you had his support. He always encouraged us,” Alexander said.

“Today, I look to the past with admiration and appreciation for so many, most of all, Dr. Westfall, and I don’t want him to be forgotten. He’s the one who made the difference and helped all the rest of us go.”