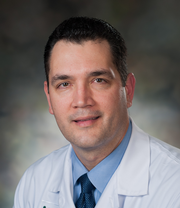 Dr. Alfredo Arribas is an assistant professor in the Bernard and Gloria Pepper Katz Department of Oral and Maxillofacial Surgery at The University of Texas Health Science Center at Houston (UTHealth) School of Dentistry.

Born in Piura, Peru, Dr. Arribas received his bachelor of science and doctorate in dental surgery degrees from Universidad Peruana Cayetano Heredia in Lima, Peru, in 1996. After moving to the U.S. in 1997, he completed a certificate in advanced education in general dentistry (AEGD) at University of Maryland School of Dentistry in 1998, a two-year general practice residency program (GPR) and a oral and maxillofacial surgery internship at LSU Health Sciences Center (LSUHSC) in 2000 and 2001. He obtained a master of science degree in health care management from the University of New Orleans in 2004.

Dr. Arribas had an extensive academic career, including being the GPR program director at LSUHSC from 2001 to 2005 and the associate program director of the AEGD program at UMSOD from 2005 to 2008. He returned to residency in 2008 and completed a four-year program in oral and maxillofacial surgery at LSUHSC, New Orleans where he was trained in full scope oral and maxillofacial surgery.

Dr. Arribas is a fellow of the American College of Surgeons.