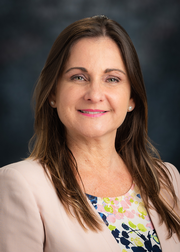 Professor Maria A. Loza, DMD, MS, FACP, is chair of the Department of Restorative Dentistry and Prosthodontics.  Dr. Loza is a graduate of the University of Puerto Rico School of Dental Medicine (UPR-SDM), where she earned her dental degree, followed by a certificate in prosthodontics and a master’s degree in oral biology from the Dental College of Georgia at Augusta University in 1996. She returned to UPR-SDM as a professor in the Restorative Sciences Department and served as Prosthodontics Section Director and Program Director of the Prosthodontics Postdoctoral Program. Before leaving UPR-SDM, she was the Dental Implant Coordinator and represented the school in the Medical Sciences Campus Academic Senate.

Esthetic and functional restoration and replacement of teeth.