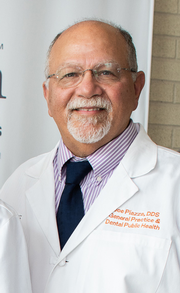 Dr. Joe M. Piazza Jr., is a 1979 graduate of The University of Texas Dental Branch, now known as the University of Texas Health School of Dentistry at Houston (UTSD). He began his professional career as an associate dentist in Bellaire, Texas, and started his private practice in Northwest Houston in 1981, where he practiced until 2015. He was active in organized dentistry and many community and church organizations.

As president of the Greater Houston District Dental Society, he worked to improve communication and collegiality of its membership and other organizations in dentistry. He became a clinical assistant professor in 2015 in UTSD's Department of General Practice and Dental Public Health. He also joined the PACE Center consulting team to teach ethical professional practice management to students.

He has been recognized and nominated for many professional awards. He was chosen for fellowships in the ACD and ICD.

Dr. Piazza and his wife, Ann, reside in West Houston and have three adult children and three grandchildren.