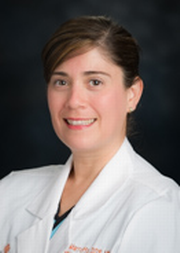 Dr. Gonzalez is a Diplomate of the American Board of Prosthodontics, who received her dental degree from Universidad Veracruzana in Veracruz, Mexico in 1996. She worked in private practice for two years and then entered a Preceptorship program in Prosthodontics at the University of Texas Health Science Center at San Antonio. In 2002 she completed a residency program in Prosthodontics and earned a Master of Science degree in Prosthodontics at the University of Texas School of Dentistry at Houston. Dr. Gonzalez has been on the School of Dentistry faculty since 2002 and in 2008 received the Dean's Teaching Excellence Award for Scholarship in Teaching. In 2009 she was elected to faculty membership in the Mu Mu Chapter of Omicron Kappa Upsilon National Dental Honor Society. Currently she is a part-time Assistant Professor in the Department of Prosthodontics and maintains a private practice limited to Prosthodontics.