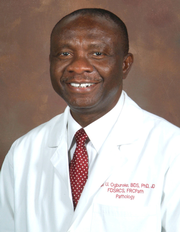 Kalu U. E. Ogbureke is a tenured professor in oral and maxillofacial/head and neck pathology at UTHealth School of Dentistry at Houston (UTSD), where he also chaired the Department of Diagnostic and Biomedical Sciences from October 2012 to December 2019. He holds several visiting professorship at institutions in the U.S. and abroad.

Ogbureke is the principal investigator studying the role of the SIBLLING family of proteins in oral cancer and precancers, and has been funded in this effort through major grant from NIDCR, and through foundation grants from the Wendy Will Case Cancer Foundation (WWCCF). His clinical practice is in the specialty of diagnostic Oral and Maxillofacial Histopathology, Head and Neck Pathology, and Clinical Oral Medicine.

In 2007, Ogbureke was awarded the inaugural Neal W. Chilton Fellowship in Clinical Research by the American Association for Dental Research (AADR) and the Emerging Scientist award by Georgia Regents University (now Augusta University) Research Institute. In 2010, he was named a Fulbright Scholar and served in that capacity for 10 months at the University of Lagos, Lagos, Nigeria (2010-2011). Ogbureke is an attorney and admitted to practice law in three United States Jurisdictions (Georgia, Massachusetts, District of Columbia) and the United States Supreme Court. His interest is in Health Law and Policy, and Forensic odontology, and is a frequent invited speaker on aspects of the interface between law and medicine at the annual meetings of the American College of Legal Medicine.

Between 2010 and 2011, Ogbureke received three separate Commendation Letters from Augusta University (AU) Presidents. He also received a Commendation Letter from Senator Johnny Isakson, a United States Senator from Georgia, following his selection as a Fulbright Scholar by the U.S. Department of States in 2010. In 2012, Ogbureke received the Outstanding Faculty Award of AU. His other notable achievements include being the only dental team member of the Nebraska Institute of Forensic Sciences (NIFS) that investigated the high-profile “Angel-Togba” homicide case in Monrovia, Liberia in 2008. Ogbureke also led a team of forensic investigators for the identification of victim of a plane crash in Kaduna, Nigeria in June 2011.

He is a Consultant/Site Visitor to the American Dental Association (ADA) Commission on Dental Accreditation (CODA), and served on the Constitution Committee of both the AADR and the International Association for Dental Research (IADR). Ogbureke served on the Board of Governors (BOG) of the American College of Legal Medicine (ACLM) from 2015 to 2018. He is a recipient of UTHealth Houston School of Dentistry, Dean’s Excellence (Scholarship of Discovery) Award (2015). Ogbureke is a 2016 King James IV Professor, Royal College of Surgeons of Edinburgh (RCSEd; 2016), and the first of African descent to receive this prestigious award.

Ogbureke served as the 2017 Harry W. Bruce Jr. Legislative Fellow by the American Dental Education Association (ADEA) where he assisted with advocacy and legislative activities relevant to Oral Health. In 2018, he completed a Fulbright Senior Scholar (Distinguished Chair) award (Fulbright US-UK Commission) at the Institute of Head and Neck Studies and Education (InHANSE), University of Birmingham, Birmingham, United

Kingdom. Ogbureke was awarded a Certificate of Congressional Recognition by the United States Congress (2018), and also received a commendation letter from Senator Ted Cruz (Texas) in 2018.

In June 2002, Ogbureke was invited as a Discussant on the subject of “NOMA in Nigeria” by the National Public Radio/ BBC, “The World Today” program (AUDIO available) hosted by Lisa Mullin. In 2010, he was profiled by the Augusta Chronicle in a full-length article titled: “Professor Stays Too Busy to Count his Degrees,”, and quoted in an Augusta Chronicle article discussing research report on “Coffee and tea intake and risk of head and neck cancer: pooled analysis in the international head and neck cancer epidemiology consortium.” The article by Galeone et al. (2010) discussed the effects of coffee consumption on the risk of developing head and neck cancers, including oral cancers. The same year (2010) Ogbureke’s research was highlighted in the Augusta Chronicles in a full-length article titled: “GHSU wants to increase research, federal funding.”

Ogbureke has authored and co-authored several peer reviewed scientific articles in high impact journals and book chapters, and is the editor and co-author of the book Oral Cancer.