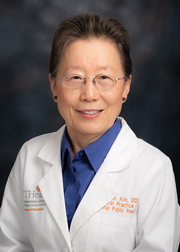 Dr. Sheila Koh, clinical professor of the Department of General Practice and Dental Public Health, is a 1990 graduate of UTHealth School of Dentistry at Houston. After graduation, she earned a certificate in General Practice Residency at the School of Dentistry and Memorial Hermann Hospital in 1991. She joined the UTSD faculty part time in 1991 and maintained a private practice until 1993, when she joined the faculty full time.

Dr. Koh started AEGD program as an assistant director in 1995 and became director of that program in 1999. She is member of ADEA and served as vice president of Council of Hospitals and Advanced Education Programs 2005-2008. Dr. Koh received a Presidential Citation Award during the 2008 ADEA Annual Meeting.

At UTSD, Dr. Koh has received multiple Dean’s Teaching Excellence Awards. Her interest area in teaching is special-needs patients, and she served as director of the school's Special Patient Clinic for many years.