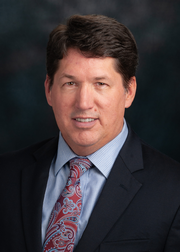 Professor Timothy C. Kirkpatrick, DDS, holder of the Frank B. Trice, DDS, Professorship in Endodontics, was named chair of the Department of Endodontics at UTHealth Houston School of Dentistry, effective Dec. 1, 2022. He previously served as interim chair from Jan. 1 to Nov. 30 of that year. Dr. Kirkpatrick also directs the Advanced Education in Endodontics Program.

After 25 years of service, Dr. Kirkpatrick retired from the U.S. Air Force in 2017, where he had served as program director of the Wilford Hall Medical Center Endodontics Residency (2006-2013) and the Keesler Medical Center Endodontics Residency (2013-2017). He was also the endodontics consultant to the Air Force Surgeon General from 2010-2017. Dr. Kirkpatrick became a diplomate of the American Board of Endodontics in 2004. He served six years as a director of the American Board of Endodontics, serving as president of the ABE from 2020-21.