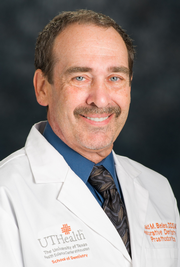 Dr. Donald Belles is an associate professor and Graduate Prosthodontics Program Director at UTHealth School of Dentistry at Houston. A graduate of Clark University, Dr. Belles went on to receive his DDS from Georgetown University School of Dentistry in 1978. He completed his prosthodontic residency program in 1987 at The University of Texas Health Science Center at San Antonio and Wilford Hall USAF Medical Center. He received his certification in 1989 from the American Board of Prosthodontics and re-certification in 2014.

In 1999, Dr. Belles retired as a colonel from the U.S. Air Force after 21 years of active service. His Air Force assignments included tours in California, Delaware, Texas, Florida, and Japan, with a last assignment as Chief of the Prosthodontic Section-AEGD Residency Program, 59th Medical Wing (AETC) at Lackland Air Force Base. He accepted a position at the School of Dentistry soon after finishing his Air Force career.

Dr. Belles completed the Educational Scholars Fellowship Program from Baylor College of Medicine in 2007. He was awarded the John P. McGovern Outstanding Teaching Award in 2007 and has been elected to faculty membership in the Mu Mu Chapter of Omicron Kappa Upsilon National Dental Honor Society. He received a Dean’s Teaching Excellence Award for Scholarship of Teaching in 2008, and in 2009 completed the Academic and Administrative Leadership Development Program at UT Health Science Center at Houston. Dr. Belles became the Program Director for Advanced Prosthodontics in 2009. He currently holds The Romero-Levine Family Professorship.