Masks continue to be strongly encouraged for everyone entering UTHealth Houston School of Dentistry. Learn more about COVID-19 precautions …
As a reminder, the Urgent Care Clinic is open (by appointment only). 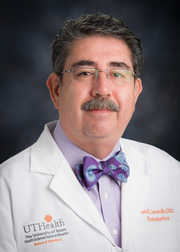 Dr Jaramillo is a professor at the Department of Endodontics at UTHealth School of Dentistry, having joined the faculty in 2014. He has been teaching non-stop since 1990, when he began teaching on a part-time basis.

Dr. Jaramillo's main research focus is in the irrigation of the root canal system. He has dictated more than 100 conferences worldwide, published over 22 peer-reviewed papers, and he has written seven book chapters, including one in Spanish and one in Portuguese. He is very active in different committees at UTHealth School of Dentistry, and was recently inducted into the International College of Dentists. Dr. Jaramillo is also a very active member of the International Federation of Endodontic Associations.