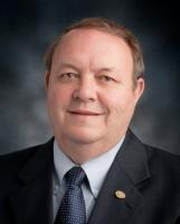 Jeryl D. English, DDS, MS, was appointed chair and program director of the Department of Orthodontics of the University of Texas Dental Branch at Houston on September 1, 2001. He was a professor and the former program director of the Orthodontic Department at Baylor College of Dentistry prior to this appointment. Dr. English has a broad range of clinical interests in treating orthodontic patients, including surgical orthodontic interdisciplinary and functional treatment.

Dr. English earned his dental degree from the University of Missouri – Kansas City in 1971 and received his orthodontic specialty certificate and a Master of Science degree in oral biology from the University of Missouri – Kansas City in 1976. He was board certified in orthodontics in 1984 and recertified in 2003. Dr. English served in the United States Army Dental Corps from 1971 until his retirement in 1995. His numerous assignments included Commander, Dental Units in Operation Desert Storm; Commander of the Pacific Dental Service Support Area and US Army DENTAC-Hawaii; Commander and Chief of Orthodontic, US Army DENTAC-Berlin and Orthodontic consultant to the Chief of the US Army Dental Corps. Dr. English was appointed in the Orthodontics Department Baylor College of Dentistry in 1995 and maintained a part-time private practice in orthodontics in Dallas until 2001.

Dr. English has been a recipient of numerous, teaching, mentoring and research awards, from various institutions and professional organizations. In 2005, Dr. English served as chair of the ABO Orthodontic Symposium for all graduate orthodontic programs in the Unites States and Canada. In May 2006, he will serve as the Scientific Program Co-Chair for the American Association of Orthodontists Annual meeting. Dr. English has written numerous orthodontic abstracts, articles and book chapters. In 2009, he published an orthodontic text book entitled Mosby's Orthodontic Review. He is widely recognized as a speaker in orthodontics on the national and international level. Dr. English has made significant contributions to the dental and orthodontic communities.